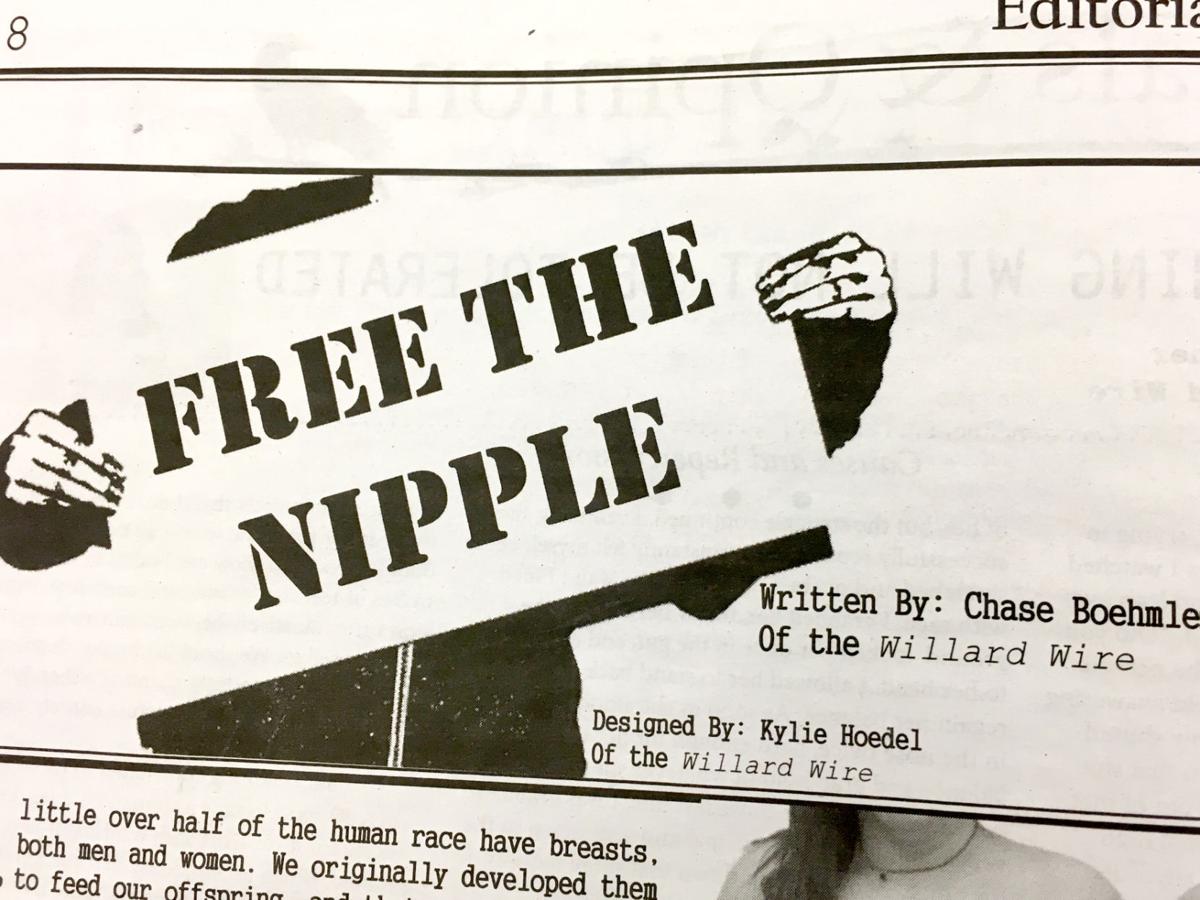 The Missoula County Public Schools district is investigating whether the most recent edition of the Willard Wire, a publication produced by Willard Alternative High School students, violated district policy by including photos of topless men and women.

The district is also recalling the edition, removing copies from shelves and angering the students who produced it. The paper is distributed to Willard, Hellgate, Sentinel and Big Sky high schools, as well as to businesses that advertise in the paper.

The Wire’s January issue features a cover story titled “Free the Nipple” by Willard junior Chase Boehmler, accompanied by a photo of five shirtless women and one shirtless man. Their nipples are obscured by red dots, and they are fully clothed from the waist down. Their faces are cropped out of the photo.On a page labeled “Editorial & Opinions” inside the edition, the article is accompanied by a picture taken by editor Kylie Hoedel of a topless woman and a topless man. Their faces are cropped out, but their nipples are bare.

“We originally developed (breasts) to feed our offspring, and that was their main purpose, but they’ve become something different, something dirty and shameful,” Boehmler wrote. “They’ve been overwhelmingly fetishized and feminized in western culture. And we need to put the kibosh on that. People all over the world are wrapped up in this illusion that we have created.”

She said the district also hasn’t determined whether the newspaper violated a policy regarding publications and distribution or postings of materials.

The policy states “school-sponsored publications and productions are part of the curriculum and are not a public forum for general student use. … Such materials may not be libelous, obscene, or profane nor may they cause a substantial disruption of the school, invade the privacy of others … or advocate the violation of a law.”

Littman said the district is also examining prior case law to determine precedent.

Hoedel said a long research-and-planning process went into the article, and staffers all knew it would be a “head turner.”

“I feel the school board should prove some sort of law that we broke,” she said. “I feel if they had read the article before they took it out of students’ hands or had the janitor throw it away without confronting us about it, they would realize the reason why we printed it was backed up by the article.”

Hoedel said she understands why some people would have a problem with the distribution of nude photos.

“If you see a picture of (female) breasts you are going to think sexualization,” Hoedel said. “That’s how our society has taught us to feel. We wanted people to think they shouldn’t be sexualized and treated just as normal as male breasts.”

Sarah Donald, a graduating junior at Willard, said she made sure that all the models for the photos were older than 18 years and that they signed consent forms.

“All of them signed a release form saying they understand they were giving permission for the photo to be taken, and we made sure all the people involved were over 18 so nothing was considered child pornography,” she said. “I am extremely upset about (the recall) because the Willard Wire became something that I was able to write about things that I am passionate about. And everyone was extremely passionate about the Free the Nipple piece and making sure it was getting to the public.”

The Wire contains an editorial message on the third page that states “Willard Wire is a completely student-run paper based on freedom of expression and opinion. Unlike the other high schools in Missoula, we do not receive any funding from the school district, which means we are funded entirely by advertisements. This limits what we can do with our paper but also gives us the freedom to write what you (the readers) would like to hear. The ethic of the Willard Wire is one of inherent integrity due to our independent journalistic nature. Fight censorship and help support our right to free speech, expression, and full liberty of the press.”

Littman said the district, in fact, partially funds the publication.

“The Willard Wire is a school publication and is in fact a school-sponsored and funded publication, so there is an investigation underway,” she said. “I can’t give a lot of details right now, but that statement (in the Wire) is probably likely to be corrected. All student publications are governed by board policy with regard to publications.”

Littman said district policy states that the paper’s faculty adviser, Lisa Waller, and Willard Principal Jane Bennett would have needed to approve the publication before it went to press. Waller was not in the office Thursday, and Bennett did not return a phone call seeking comment.

Boehmler, the author of the article, said the Free the Nipple movement is about ending the shame associated with having a body that is perceived as feminine.

“I feel pretty strongly about the Free the Nipple movement, because me and a lot of girls and women have experienced large amounts of sexual harassment just for having breasts. And it’s completely unfair and hypocritical that gender identity is the basis of whether or not you can remove your shirt,” she said. “And it’s unfair to breast-feeding mothers that breast-feeding in public has to be such a controversy when it’s what you should be doing. I felt like I needed to take a stance on it and did something that was risky.”

Boehmler said Free the Nipple, which has gained nationwide traction, is about equality.

“The Free the Nipple movement is an equality movement for everyone to feel like everyone’s body is equal,” she said. “Your body feels like this trap. No matter what, you’re a sexualized object. It’s a movement for all people really.”

She said the pictures were necessary – having an article laying out her case without them wouldn’t have had as much impact.

“They show the innocence of toplessness,” she said of the photos. “We put it in because it’s a powerful message to show we believe in the Free the Nipple movement this much, and being topless is innocent no matter who you are.”

Hoedel said the Wire has pushed a lot of aspiring young journalists to explore topics they are nervous about.

“Having the freedom for the students to write what they feel is important because it helps them learn more,” she said. “If they are not passionate about it, it’s not going to be well-written. I feel it was too much censorship on (the district’s) part.”