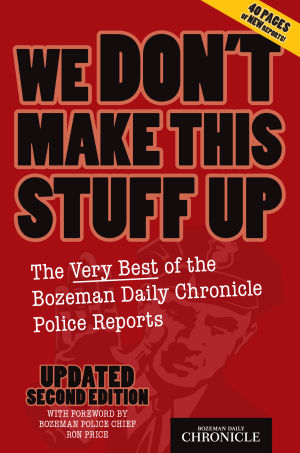 “The first edition of the book was so popular we went through three printings to fill all the orders,” said Stephanie Pressly, publisher of the Chronicle. “There are amusing entries published every day so we figured it was time for another book.”

The Chronicle began publishing daily police reports in the late 1970s. Since then, the reports have become somewhat renowned as not-to-be-missed, often laugh-out-loud reading for locals and people around the world. Entries have made the “Tonight Show” more than a few times.

“A lot of people are convinced that we make these things up, but we don’t,” said Pressly.

Bozeman Police Chief Ron Price acknowledges in the foreword to the book that funny things do happen.

“As an officer, these are often the calls that you drive away from, scratching your head and wondering if that really happened,” he writes.

The book is available for $10 at the Chronicle office, 2820 W. College St., and many local retailers.

Also available this year are long-sleeve T-shirts featuring various police report entries. They are for sale at the Chronicle office for $20. T-shirt and book combos are available for $25.

Orders can be placed online at bozemandailychronicle.com/police_reports/book or via email at [email protected].